Driven by a long-standing passion for Bach, Scott Dettra, Music Director and Organist of the Church of the Incarnation of Dallas, is launching a series of free noon concerts focused on the music of the German Baroque composer.

“Even classical music fans really only know the tip of the iceberg when it comes to Bach’s production,” says Dettra. On October 12, he will lead the musicians of the region in Bach’s rarely heard Cantata 49, a surprisingly sensual dialogue between Jesus (a bass) and a human soul (a soprano). “When was the last time Cantata 49 was played live in Dallas? Dettra asks. “Maybe never? “

The offerings will also include pieces by members of Bach’s family and his contemporaries. At the opening concert on September 14, Eric Smith, artistic director of the American Baroque Opera Company of Dallas, will perform viola da gamba sonatas by Bach and his son, CPE Bach, with Dettra on harpsichord.

The Church of the Incarnation made the series possible thanks to recent acquisitions of a German harpsichord – modeled after the designs of an 18th century harpsichord maker – and a small chamber organ built in the Netherlands. Low. “Now we have suitable continuo instruments to play this music,” says Dettra. (In Baroque music, “continuo” refers to harmonies filled with improvised harpsichord, organ and / or lute chords.)

Lunchtime performances can have a hard time attracting audiences. “That’s one of my concerns, to be completely frank,” Dettra says. “I hope we can create a strong following for this, and in the years to come we may be able to do this more than once a month.”

Parishioners and church retirees are among the target audiences for the series, as well as employees during their lunch breaks.

The public will have to be masked, and the musicians will be masked and vaccinated.

CORRECTED at 4:30 p.m. on September 14: A previous version had an incorrect address for the Church of the Incarnation. 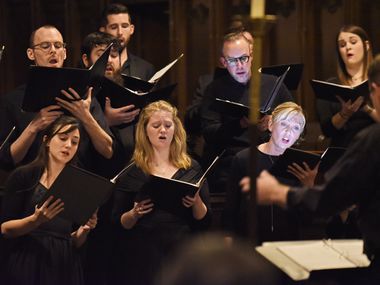